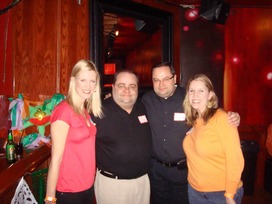 The Whipple family was your average American family living in Iowa, raising twin girls, Addison and Ashlyn, and leading a normal life.  On November 1, 2006 their lives were forever changed when Addison was diagnosed with Neuroblastoma.  Nearly 2 years later, Ashlyn was also diagnosed with Neuroblastoma.  In March 2008, Addison's scans showed that she was tumor free.  However, Ashlyn was still fighting for her life.  Mary was an unsung hero in her church and community.  She was constantly giving to others, but had very little for herself and her home was in dire need of repairs.  The donations from Dos de Mayo helped secure a much-needed new roof for Mary's house, as well as pay for the necessary interior renovations to make her home safe and livable.  Funds raised helped pay for medical bills as well as travel expenses to and from the out of town hospital they go to for their daughter's treatment.