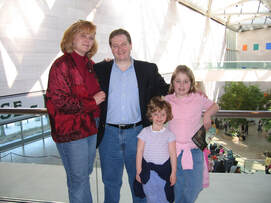 In his two years at Time Warner and more than ten years on Capitol Hill with Senator Orrin Hatch and the Senate Judiciary Committee, Shawn Bentley made a tremendous impact on his community. He was a dear friend whose warmth, humor, and compassion enriched every life he touched.

Shawn was diagnosed with cancer earlier in 2005. With his wife, Becky, and two young daughters by his side, Betterment was eager to join them to show our support for Shawn and his family.

The Bentley family lived in Fairfax, VA and were very involved in their community and church. As an active leader in his church with a commitment to serving others, Shawn shared his gifts generously and touched many people. Both Becky and Shawn taught Sunday School at their congregation.

Shawn served as the ranking Elder in his congregation, where, as part of the lay clergy, he spent 10 - 20 hours every week tending to the needs of the individuals in his congregation. In addition, Shawn spent two years in Brazil at his own expense serving and teaching the people there.

To help give back to Shawn's family in their time of need what he has so generously given to others all his life, his friends in the Washington political community joined together with Betterment to host a fundraiser in his honor last April.