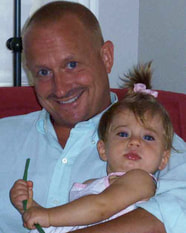 At the age of 18, Chris was diagnosed with Non-hodgkins Lymphoma.  He left college at Indiana University so that he could go through chemotherapy and other treatments in hopes of being cured.  19 years later, as a new husband and new father, Chris's cancer returned.  His doctors tried many treatments yet none had been completely successful.  Last summer, he went through a stem cell transplant and was still trying to regain his health.  He had not been well enough to work for over a year, and because of the failing real estate market, his last year of working was difficult.  Thankfully, his wife had been able to keep her job, but his illness had cost them a great deal of expenses above and beyond their day-t0-day.  Proceeds from Chicago's Betterment Summer Party helped relieve the financial burden placed on Chris and his family so they could focus on his health.